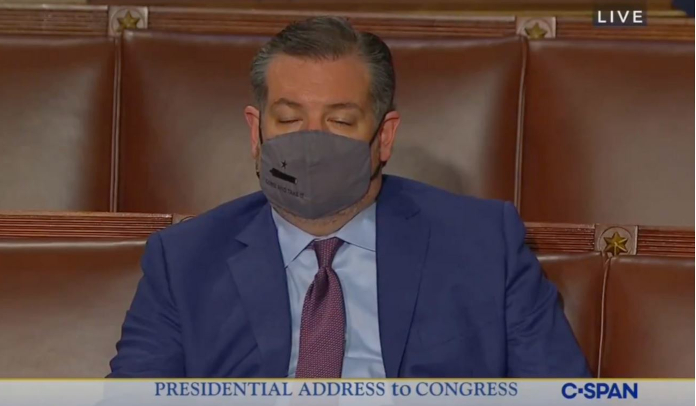 Republicans apparently can’t stand the fact that President Biden is boldly dealing with the major problems that face us today and that the American people appreciate his efforts.

While the president, since his inauguration, has gone big with bold and successful initiatives to get the Covid 19 pandemic under control and provide critically needed financial resources to those whose lives have been upended by the virus, Republicans are nitpicking, whining, and doing everything they can to sow division and distrust.

During Biden’s joint address to Congress last night, Sen. Ted Cruz (R-TX), one of the slimiest of all GOP slimeballs, was caught by the TV cameras nodding off and dozing as the president discussed immigration and the problems at our Southern border — a topic about which Cruz has railed.

But the senator later tweeted that he dozed because Biden’s speech was “boring but radical.” That makes no sense. If something is radical, how could it be boring? Anyway, Twitter exploded with the video above.

When Biden talked about the need to stop the proliferation of weapons of war that are being used in mass shootings, some Republicans simply shook their heads, while others snickered. His earnest call for the Senate to pass the House-passed For the People Act voting rights bill drew the same reaction.

Those Republican senators chuckled even as mass shootings continue in our nation and as two House-passed bills designed to improve background checks to keep guns out of the hands of potential killers are stuck in their chamber. Republicans hold 50 votes and can block virtually any legislation by using the filibuster, which requires 60 votes to break.

Meanwhile, the House-passed voting rights legislation languishes in the Senate as well, also because of the filibuster. This, of course, is the case as state after Republican state enacts new laws designed to restrict voting in a variety of ways, all in response to Trump’s continued unfounded claims that he lost the election due to voter fraud.

Sen. Jim Clyburn (D-SC), whose primary election endorsement of Biden helped him secure the Democratic presidential nomination, says the House-passed bill “advanced the biggest set of voting protections since the Voting Rights Acts of 1965. Georgia’s new restrictive law and others like it “are the new Jim Crow,” Clyburn says.

As for the Republicans?

Following Biden’s speech, Sen. Tim Scott (R-SC), the only Black Republican in the Senate, gave the GOP’s response to Biden’s address. I thought he was pathetic.

“President Biden promised you a specific kind of leadership. He promised to unite a nation, to lower the temperature, to govern for all Americans, no matter how we voted,” Scott said. “But three months in, the actions of the president and his party are pulling us further apart.”

Really? Why? Because Biden wants the wealthy and corporations to help finance infrastructure and education improvements, and other initiatives that are designed to benefit everyone, not just the well-to-do?

If Biden’s actions are widening, not narrowing divisions, Sen. Scott, why is it that the most recent FiveThirtyEight compilation of polls shows that 53.9 percent of the American people approve of the job he is doing compared to just 38.7 percent for Donald Trump at the 100-day mark of his presidency?

Over Biden’s first 100 days he has demonstrated the competence and stability that was sorely lacking in the Trump administration. While the Covid 19 vaccinations were developed during Trump’s presidency, it has been under Biden that more than 200 million shots have been given, double the new president’s original promise.

RELATED ARTICLE: Are You Supporting Genocide Through Green Energy?

And while the results of those efforts have generated renewed confidence among a majority of Americans, Republicans still look for every way possible to belittle Biden, Vice President Kamala Harris, and his administration. Even if they have to make it up.

House Minority Leader Kevin McCarthy (R-CA) previewed the GOP attacks on Fox News on Sunday, accusing Biden of a “bait and switch” — promising to be a leader who values bipartisanship, but who in actuality passed a $2 trillion pandemic relief bill with no Republican support.

“The bait was he was going to govern as bipartisan, but the switch is he’s governed as a socialist,” McCarthy said.

Senate Minority Leader Mitch McConnell (R-KY) accused Biden and Democrats of engaging in “brazen misdirection” and living “in an alternate universe where both the campaign promises they made and the mandate the American people delivered were completely different than what happened here on planet Earth.”

“Behind President Biden’s familiar face, it’s like the most radical Washington Democrats have been handed the keys, and they’re trying to speed as far left as they can possibly go before American voters ask for their car back,” McConnell said.

So what do the Republicans have? Not much, just their tired old tropes, name calling, and efforts to turn the facts around to suit their failed arguments.

They are also resorting to silliness and, like their master, Trump, bald faced lies.

Conservatives on social media went nuts over a New York Post story this past week that claimed undocumented minors were being welcomed to the United States with copies of a children’s book written by Vice President Harris and that Harris was making money off of that.

But then the reporter who wrote the story acknowledged that it was a lie, fabricated, made up, and that she had been ordered to do so by her bosses at the right-wing publication owned by Rupert Murdoch, who also owns Fox News.

“The Kamala Harris story — an incorrect story I was ordered to write and which I failed to push back hard enough against — was my breaking point,” Laura Italiano tweeted Tuesday afternoon, several hours after her viral article about the books had been deleted from the Post’s website and replaced with corrected versions. Italiano resigned from her job as a result.

Meanwhile, conservative lawmakers and GOP party officials jumped all over the story during the four days it remained online and uncorrected.

Sen. Tom Cotton of Arkansas and Rep. Jim Jordan of Ohio both blasted it. And Republican National Committee chair Ronna McDaniel tweeted: “After learning officials are handing out Kamala Harris’ book to migrants in facilities at the border, it’s worth asking . . . Was Harris paid for these books? Is she profiting from Biden’s border crisis?”

That, of course was not the only bit of nastiness cooked up by the Republicans over the past week or so.

There was the stupidly false claim that to fight climate change Biden plans to reduce red meat consumption by 90 percent, limiting everyone to just four pounds of red meat a year.

It all began with a story in the right-wing Daily Mail in the United Kingdom about a University of Michigan study that had nothing to do with any administration initiative.Then, Fox Business host Larry Kudlow warned viewers that there would be “no burgers on July 4th.”

Texas Gov. Greg Abbott, Idaho Gov. Brad Little and former South Carolina governor Nikki Haley, all Republicans, jumped on the bandwagon, and Rep. Marjorie Taylor Greene (Ga.) tweeted a picture of Biden with a hamburger to suggest that he was a hypocrite: “No burgers for thee, but just for me.”

Finally, Fox News’s John Roberts apologized for a network graphic that had suggested Biden intended to cut red meat consumption, admitting “that is not the case.”

That incident and the one about the vice-president’s children’s book, simply illustrates the fact that Rep,ublicans learned well from Trump about the effectiveness of the lie.

As The Washington Post reported, the nation experienced 30,573 false or misleading claims over Trump’s four years in office, culminating in the baseless claim that the 2020 election was stolen, which ultimately helped provoke the deadly Jan. 6 insurrection at the U.S. Capitol — and which has spawned all of those GOP bills to prevent people from voting.

What else do the Republicans have these days?