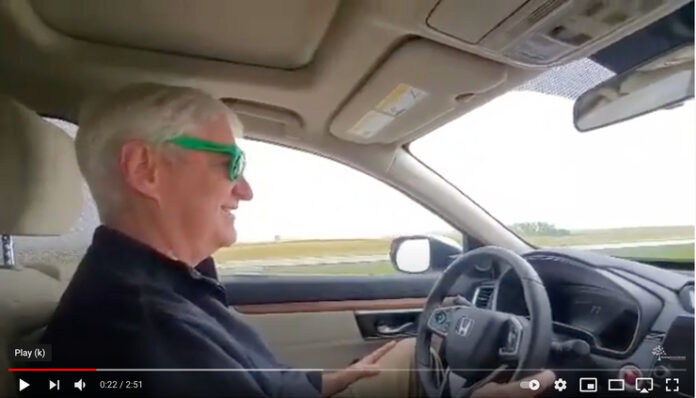 Dave and Linda Fleischer are well underway on their Journey of Hope in memory of their daughter, Sarah, who passed away in 2018 from a horrible cancer, cholangiocarcinoma.

In this episode, Dave reports in from South Dakota, after visiting several western states, three towns called Hope, and several colangiocarcinoma patients and families. All together, plans call for the trip to include stops in 18 towns named Hope all across the country.

A major goal of the trip, which will take Dave to all 48 contiguous states, is to help raise money to support research into this disease and during which they hope to spread awareness and bring hope to patients, caregivers, and others along the way. He reports that in the first week of the Journey, $20,000 has been raised – an astonishing amount, as the original goal for the entire trip was $15,000.

The road trip, in a car with a specially designed wrap promoting cholangiocarcinoma awareness, will include stops at various hospitals and healthcare institutions that specialize in research and treatment of the disease, and get-togethers with other patients, caregivers and healthcare providers who were important in Sarah’s life. This coming week, Dave and Linda will visit the Mayo Clinic.

Cholangiocarcinoma starts in the bile duct and is an incredibly deadly cancer, which afflicts about 8,000 people in the United States each year. Most of its victims are 65 or older, but Sarah was only 31 when she was diagnosed. She passed away at age 35.

Linda will be flying home next Sunday after 10 days on the road with Dave, and then he will be on his own – except for the many well-wishers and supporters he is meeting along the way. The journey is scheduled to end June 29 or July 1, depending on circumstances.

The trip is being supported by the Foundation, which has made the specially designed Honda SUV available for the journey. Sponsors are Incyte, Ken Garff Honda, QED Therapeutics, Servier, Taiho Oncology, Welch’s Fruit Snacks and Zymeworks.

And now, take a listen as we talk with Dave Fleisher as he reports in after his first week on the Journey of Hope.