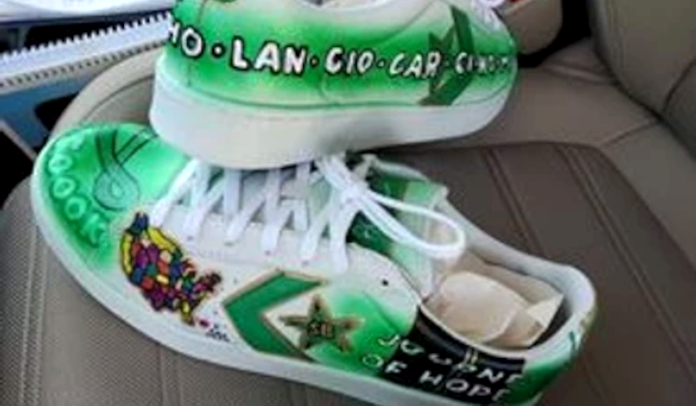 On a Quest to End Division & Hate

A Crusade to Overcome Divisions in our Society

Do Right, Be Right & Pay it Forward

The Supreme Court: Democracy Takes a Hit or Three

A young man whose wife died of Cholangiocarcinoma designs sneakers to promote research into the disease.

“How do we do a better job of keeping our perspective and recognizing the good?” asks Dave Fleischer as he continues his Journey of Hope, raising funds for research into Cholangiocarcinoma, the cancer that claimed his daughter.

It was a question Fleischer asked as he motored towards Hershey, PA, having driven more than 10,000 miles throughout the U.S. on a journey that honors his daughter, Sarah, who died at age 35 four years after being diagnosed with the deadly cancer.

Fleischer contends that if the patients and caregivers can do be positive, despite the grim outlook posed by Cholangiocarcinoma, then “why can’t others that don’t have major issues to deal with?”

“That’s not easy,” he acknowledges, “but you think about that a lot (when driving so many miles.) I’ve met so many people who have stories. Whether they’re a medical professional , a patient, a caregiver…

“Most people want to just live their lives and make it. I’ve seen a lot of people working really hard…like real hard labor and people who are working in research labs, and some of the challenges that they have,” he says.

“As an example, the people in research working with the bureaucracy to advance certain causes and some of the stuff that gets in the way. You hear all these reasons why there are all these problems, but you say, ‘I haven’t heard anything yet that if we really put our mind to it couldn’t be solved.'”

“I think as a country there’s an opportunity for things to be better based on, really, what most people want. It’s about having good discussions, not arguments,” Fleischer says.

On his journey, Fleischer has visited several towns called Hope, numerous Cholangiocarcinoma caregivers, patients and families. Altogether, plans call for the trip to include stops in 17, maybe 18 towns named Hope all across the country.

A major goal of the trip, which will take Dave to all 48 contiguous states, is to help raise money to support research into this disease and to spread awareness and bring hope to patients, caregivers, and others along the way. He’s closing in on the goal of $45,000 – and the trip has two weeks to go. The journey is scheduled to end June 29 or July 1, depending on circumstances.

The road trip, in a car with a specially designed wrap promoting cholangiocarcinoma awareness, includes stops at various hospitals and healthcare institutions that specialize in research and treatment of the disease, in addition to the get-togethers with patients, caregivers and healthcare providers who were important in Sarah’s life. He says those visits are remarkable.

Cholangiocarcinoma starts in the bile duct and is an incredibly deadly cancer, which afflicts about 8,000 people in the United States each year. Most of its victims are 65 or older, but Sarah was only 31 when she was diagnosed. She passed away at age 35.

The trip is being supported by the Cholangiocarcinoma Foundation, which has made the specially designed Honda SUV available for the journey. Sponsors are Incyte, Ken Garff Honda, QED Therapeutics, Servier, Taiho Oncology, Welch’s Fruit Snacks and Zymeworks. Tee shirts commemorating the trip are available by clicking on the store at https:cholangiocarcinoma.org.

Listen to the complete interview with Dave Fleischer as he reports in after his fourth week on the Journey of Hope. He shares with us more of what he’s been thinking about while driving all those miles by himself. Some of it’s funny. Some pretty meaningful.