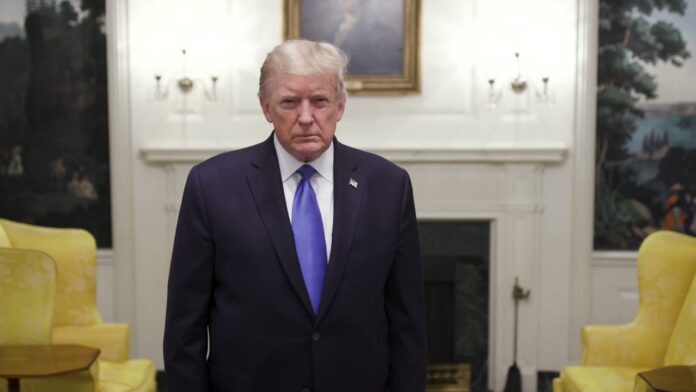 How Does This Impact America’s National Security?

On October 2nd 2020 the world woke up to startling news that the President of the United States and the First Lady Melania Trump, were tested for the Chinese Communist Party virus, COVID-19. Unfortunately for the first family and the American people, the test results came back positive.

The President himself sent out a tweet stating “Tonight, @FLOTUS and I tested positive for COVID-19. We will begin our quarantine and recovery process immediately. We will get through this together.”

Following this message was a plethora of tweets from both sides of the political spectrum. Some with condolences, while others shared their disdain and outright hatred towards the first family.

He then posted a tweet updating the American people on his and First Lady Melania Trump’s medical status and that they would be going to Walter Reed Medical Center and that the President himself will be working out of the Presidential Quarters at Walter Reed. In his tweet he stated, “I want to thank everybody for the tremendous support, I am going to Walter Reed Hospital. I think I’m doing very well, but we’re going to make sure that things work out.” He then continued to state, “The first lady is doing very well,” Trump said. “So thank you very much. I appreciate it. I will never forget it. Thank you.”

Dr. Sean Conley, the White House physician and the additional members of the medical team gave a press briefing on October the 4th in which Dr. Conley stated that he is, “extremely happy with the progress Trump is making, having had a mild cough and some nasal congestion as well as fatigue.”, he also added that since, those symptoms have been treated and are now resolved.

An even bigger story as an extension of these circumstances is to ask, how does this affect foreign policy and the Nation’s security?

Tim Hogan, who is known to be an open-source intelligence practitioner, published a tweet stating that “There’s an E-6B Mercury off the east coast near D.C. I looked because I would expect them to pop up if he test positive. It’s a message to the small groups of adversaries with SLBM’s and ICBM’s.”

What is all of this referring to?

There’s an OP called “Operation Looking Glass”. The E-6B Mercury are a very strategic part of this operation. The planes help extend America’s ability to provide aerial command and control of U.S. nuclear capabilities. This is especially true if ground based nuclear command centers were to be destroyed. These planes allow the United States to communicate with America’s Ohio class submarines, which are equipped with nuclear tipped submarine-launched ballistic missiles, otherwise known as (SLBM’s).

In the wake of US-China and US-Russia relations, this seems to be a message that America will be ready to defend herself no matter the situation and no matter who the leader in power is. According to Forbes, the United States has around 16 of the E-6B Mercury.

According to a previous report in Crossroads on the Epoch Times, they highlighted a post on Twitter by Hu Xijin, who is Editor in Chief for the Chinese State run media, the “Global Times” in which he says, “President Trump and the First Lady have paid the price for his gamble to play down the COVID-19. The news shows the severity of the U.S. pandemic situation.” However, that post was later taken down, reports say the order came directly from the top. Xi Jinping later gave his condolences to President Trump and the First Lady, Melania Trump.

Was this pre-planned to show Xi Jinping as a leader on the softer side or did Director in Chief, Hu Xijin take it upon himself to create and publish the post without the direction of any cadres in the Chinese Communist Party? Furthermore, what will the President do after he recovers? Will the push against the CCP escalate among the free Nations of the world?

Even before President Trump and the First Lady caught the CCP virus, you could see the direction the world is taking against the Chinese Communist Party. The precursor for war has already begun. The first objective is to take away China’s ability to finance their war against the free world. This is where sanctions against strategic sectors in their economy play a part, and if you’ve been watching the news, chess is already in play.