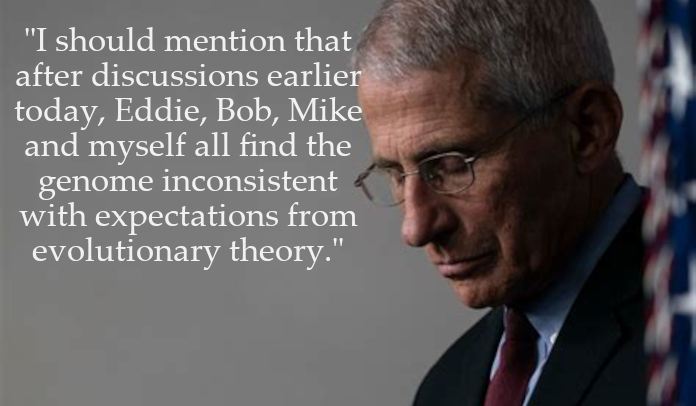 Recently, emails were released belonging to Dr. Fauci, related to the corona virus pandemic and his response. As it is beginning to look, seems as if Dr. Fauci’s channels, and as head of the NIH during the time in question, supported gain of function research through government grants procured through the NIH. Whether this was done with the knowledge or not, is still under question and an investigation may be started over the current allegations being reported.

Gain of Function research involves studying the bat corona virus’ ability to infect humans through man made genetic practices that help create more infectious strains of the virus. Through these methods, a scientist can learn about how a virus could infect others and how external parties could use the virus with gain of function research for ill intent, whether they are terrorist, rouge Nations or dictators.

Reports have stated that Dr. Fauci took no time to mention any of this to President Trump or anyone in his administration at the time. However, Dr. Fauci was well aware by this time that possible funding on gain of function research could and might happen as he was the one who sought the lift on the ban.

The History Behind the Wuhan Institute of Virology

The Wuhan Institute of Virology was created as a collaboration between the French and the Chinese Government. The WIV was supposed to be a beacon of international cooperation in the bio sciences and related fields. However, according to reports, after the construction and launch of the Institute, the Chinese government decided to kick out their French counterparts from any type of collaboration in the WIV.

This angered the French government over China’s improper behavior. According to reports, the French intelligence warned other Nations about the potential use of the new lab for military biological purposes. As reports show, in 2015 an Israeli bio-weapons expert named Dany Shoham did an in-depth analysis of China’s research in the field of Biological weapons, he intentionally mentioned the Wuhan Institute of Virology as a possible threat. Similarly, the U.S. intelligence agencies seemed to have been concerned and well aware of the risk the WIV possessed. Though from their part, not much was done concerning this risk.

In 2015, a paper was released by “Bat Woman” Shi Zhengli and the University of North Carolina based on a controversial research they completed that allowed them to create a highly infectious new virus. Even more, the research was done with NIH funding and as it is alleged, it may have even happened during the Coronavirus ban on gain of function research.

The questions around the funding of Coronavirus research by the NIH doesn’t stop here either. In a recent report by SkyNews Australia, they highlighted a paper on how the NIH was funding research conducted by Chinese Military Scientist. “American tax-payer dollars were funding research to genetically manipulate Coronaviruses with the People’s Liberation Army, the (PLA).”

Emails released by BuzzFeed through an FOI, show that Fauci was concerned with NIH funding of Coronavirus research and requested an urgent briefing on the matter. On February 1st 2020, Dr. Fauci emailed his Deputy Director Hugh Auchincloss which stated, “It is essential that we speak this a.m. Keep your cell phone on. I have a conference call at 7:45 a.m. with Azar. It likely will be over by 8:45 a.m. Read this paper, as well as the email that I will forward you now.”

Later that morning at 11:45am, Hugh Auchincloss replied to Dr. Fauci stating, “The paper you sent me says the experiments were performed before the gain of function pause but have since been reviewed and approved by the NIH.” Hugh then continued to say, “Not sure what that means since Emily is sure that no Coronavirus work has gone through the P3 framework. She will try to determine if we have any distant ties to this work abroad.”

This correspondence seems to suggest that Fauci was very concerned with the possibility that the agency he was in charge of at the time, contributed to the development of the virus that caused one of the largest pandemics in world history. However, if Dr. Fauci was so concerned, then why did he act in a manner that was gullible, naïve and ill-informed prior to the outbreak? Or was he?

On an interview, Dr. Fauci was asked (paraphrasing) why would he approve funding for such research in China? Dr. Fauci responded with a statement that included “You do it in China through a very well known, highly qualified laboratory.”

Based on the recently explained initial history of the conception of the Wuhan lab, further at the top of this report, one can easily conclude that “well know”, “highly qualified” and even safe or adequate are not words that should describe such a facility.

He then continued by saying, “Now, you’re absolutely correct, that I can’t guarantee everything that’s going on in the Wuhan lab, we can’t do that, but it is our obligation as scientist and public health individuals to study the animal human interface.” Dr. Fauci then stated, “So, you don’t want to go to Hoboken NJ or to Fairfax Virginia to be studying the bat human interface that might lead to an outbreak, so you go to China…”

As some have already argued, it is Dr. Fauci’s job as a public health official and head of the NIH, to make sure that dangerous research that can become potential pandemics are done in a safe environment with adequate equipment, procedures and laws like what the United States can provide. Furthermore, if he cannot guarantee that he has oversight on everything that happens with NIH funding, especially abroad, could that be considered out right negligence on something so basic for someone in his position?

Dr. Fauci’s response is more reasonably expected to come from someone who doesn’t know how viruses spread. In his position, he is well aware that a virus in China can spread to the United States and the rest of the world.

You would think that a man in his position would have the common sense to determine that the safest place to execute experiments as dangerous as gain of function research with corona viruses, would be in a country like the United States, which has adequate equipment and procedures to contain such an outbreak. Even more so, a Nation that has the decency and respect for human life, as to not purposefully allow the virus to spread throughout other countries, while at the same time blocking it from spreading at home. This is exactly what the Chinese Communist Party did during the months of November and December of 2019, when the outbreak began in Wuhan, China.

The Biden Administration Takes No Action

Another reporter asked, “Could you imagine any circumstance where President Biden would ever fire him?” His press secretary Jen Psaki responded with one word, “no.”

After the release of Dr. Fauci’s emails and the new evidence about the Wuhan Lab, there is still not even an investigation on this matter. As if all responsibility has been thrown out of the window, and any hope for accountability has been stomped on and buried.