Home US News Has the CCP Hijacked the BLM Movement? 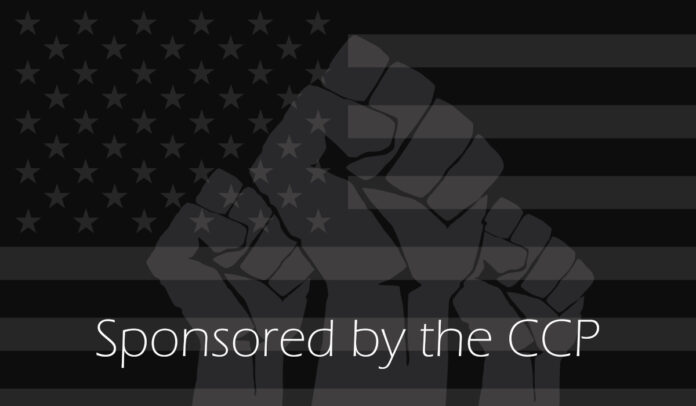 While it was a just and honest movement, it seems that the BLM message has been hijacked by external and foreign sources. According to Attorney General William Barr who said in a statement, “It appears the violence is planned, organized and driven by anarchists and far-left extremist groups using ANTIFA like tactics. Many of whom travel from out of state to promote the violence”.

A.G. William Barr also stated that “The violence instigated and carried out by ANTIFA and other similar groups, in connection with the rioting, is domestic terrorism and will be treated accordingly”.

Based on this statement, on could surmise that the possibility that “similar groups“, could be external forces at play from a foreign government power. Considering that we are less than 40 days away from a contentious Presidential election, one would be very hard pressed not to see China’s incentive to get involved in this election, one way or another. Additionally, this is exactly the kind of political opportunity China could use their United Front Work Department in order to create a hostile environment for American Communities.

While Attorney General William Barr may have already seen concrete evidence of this, the rest of the country will have to either take his word for it or do their research… Or both. However, you really don’t have to look very far to find evidence. In the Washington, DC riots, there was quite a diverse group of individuals and you could tell that many of them were not speaking English. In fact, YouTube had videos of them that were later highlighted in major news media.

Alicia Garza assisted in the creation of Black Lives Matter in 2013, she later founded a sister organization of the Black Lives Matter Group called Black Futures Lab. This organization (Black Futures Lab) has direct relationships with, and is funded by the Chinese Progressive Association (CPA). The Chinese Progressive Association currently has, and has for decades, close ties to the Chinese Communist Party. It is alleged that the CPA could also be a part of the CCP’s United Front Work Department, which is one of the outreach arms of the CCP. The United Front Work Department has an alledge 200,000 member list of scholars, engineers and specialist in all sectors of business and social constructs across the world.

In the Black Futures Lab website, a donate button is available which redirects you towards an explanation which states, “Black Futures Lab is a fiscally sponsored project of the Chinese Progressive Association.” Additionally, reports by the Heritage Foundation proposes the question on whether the Department of Justice (DOJ) could go after these organizations and prosecute both the companies and their executives under the RICO Act.

If one questions themselves, if this is possible, they should follow it up with another questions, “Does the CCP have an interest in creating discord in the United State during an election? According to intelligence reports, there has been a dramatic increase in cyber attacks from China during 2020 in preparations for the election. This doesn’t minimize Russia and Iran’s contributions to the total number of attacks. They too have a vested interest in creating discord and economic hardship on Americans.

Under the RICO Act, criminal heads and executive of legitimate organizations or syndicates can be tried for crimes that would otherwise be excused with previous legal loopholes. The Act focuses more on racketeering and in most criminal cases, it can encompass a number of executives and leaders of an organization. This flips the narrative that the ones on top, always get away with crime. As such, pursuing and prosecuting these organizations under the RICO Act is an options that Department of Justice has and may already be underway.

Should these investigations be made public, we will finally be able to learn about the depth of the Chinese Communist Party’s involvement in the U.S. riots and the ties that bind ANTIFA and BLM with the CCP.