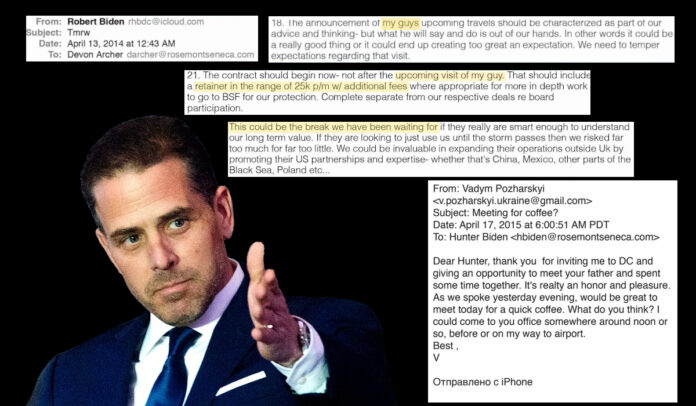 In 2019 a laptop belonging to then Vice President’s son Hunter Biden, was dropped off at a repair shop. Inside this computer, is alleged to contain many provocative and incriminating photos, emails and additional files. Not all of the data has been confirmed by the team at the People’s Olive Branch, but what has been widely reported across mainstream media, and originally reported by the New York Post are photographs of Hunter Biden with what looks to be either a cannabis or crack pipe. Assumingly over an evening of fun and rambunctious escapades.

However, what really took the headline news were the released emails by the New York Post, showing that then VP Biden and his son Hunter Biden did in fact communicate about foreign business dealings and transactions that are illegal and criminal in nature.

Reports on Hunter Biden’s emails suggest that Hunter Biden did in fact introduce Vice President Biden at the time, to top Burisma executive Vadym Pozharskyi on April 2015 in Washington, DC. Burisma Holdings is a Ukrainian Natural Gas Firm. We’re going to add a little context to this report to help you wrap your head around the situation.

Month’s after the fateful golf session, Viktor Shokin is fired, and the investigation against Burisma Holdings sees its end. The news of the firing of Viktor Shokin comes as no surprise to those who have seen the video footage of then Vice President Biden brag about the demand and “Quid Pro Quo” of Viktor Shokin’s firing in exchange for the $1 Billion aid Congress approved for Ukrain. This was a more modest bill that was approved near unanimously with the House approving it by 399 to 19 and the Senate passing it by 98 to 2.

House majority leader, Representative Eric Cantor of Virginia stated “This bill is a first step toward supporting the Ukrainians and our Central and Eastern European partners, and imposing truly significant costs on Moscow”.

As reports go and from VP Biden himself, which you can find on YouTube, he effectively stepped in to put a stop on the Burisma probe. Then VP Biden stated, “I remember going over and convincing our team, others, to convince that we should be providing for loan guarantees. And I went over, I guess, the 12th, 13th time to Kiev. And I was supposed to announce that there was another billion-dollar loan guarantee. And I had gotten a commitment from Poroshenko and from Yatsenyuk that they would take action against the state prosecutor. And they didn’t.

Initially, after the laptop was dropped off, reports say that according to the shop owner, the FBI came in and took it but not before a copy of the hard drive was made and given to Robert Costello who is an attorney for Rudy Guilliani. Guilliani is currently the personal attorney for President Trump.

As reported by the New York Post, Fox News and other sources, some of the emails directly contradict both Hunter and then VP Biden on their very public statements that they do not speak with each other concerning business matters, both local or foreign. Additionally, an email sent by an advisor to the board of Vadym Pozharskyi on April 17th, 2015 goes as follows.

“Dear Hunter, thank you for inviting me to DC and giving an opportunity to meet your father and spent some time together. It’s really an honor and a pleasure”, this was initially reported by the New York Post. Furthermore, also found in the laptop, on a previous email from May 2014. Top Burisma executives asked Hunter Biden, “advice on how you can use your influence on behalf of Burisma Holdings?”

In a statement by Biden’s Campaign Spokesman Andrew Bates, was said that “Investigations by the press, during impeachment and even by 2 Republican led Senate Committees whose work was described as ‘not legitimate’ and political by a GOP colleague have all reached the same conclusion. That Joe Biden carried out official U.S. policy towards Ukraine and engaged in no wrong doing.”

Additionally, Bates added that, “The New York Post never asked the Biden campaign about the critical elements of this story.” The statements from the campaign spokesman comes on the heals of a New York Post email expose, which indicates that then VP Biden did in fact meet with a top executive at Burisma Holdings.