Home Opinion Is China Running into a “Shared Values” Problem? 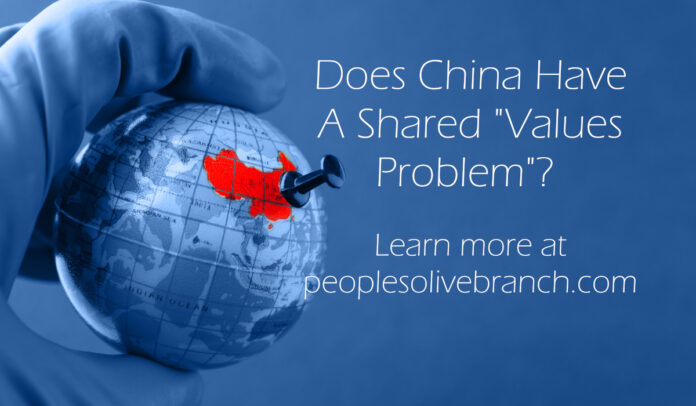 How can a Nation build meaningful collaborative security alliances without shared values?

Ever since the beginning of time, Kingdoms and Nations that work towards a common purpose, tend to do so because of shared values and/or interest. Whether they may agree with everything or not, in the end, there are common traits that both parties alike see a benefit to. For example, one Kingdom wouldn’t work with an enemy that would just as easily wipe them out after taking out a rival Kingdom.

On the contrary, sharing power between 3 Kingdoms may create more stability in the end. Take this concept and put it towards the China model and let’s move forward a few centuries.

China was a poor country but over the last quarter to half a century, China has risen to become an economic and military power. As such, some of the CCP cadre leaders are realizing that China no longer has to hide their power, they’ve decided that they can begin asserting their authority all over the Indo-Pacific region.

With this in mind, they’ve created man-made islands, which were completed around Obama’s administration. As reports show, during that time, President Obama asked his Chinese counterpart that they will not militarize those Islands. The Chinese leaders responded with a resounding agreement that they would not. However, by the end of the first term of the Trump administration, the islands are manned and armed to teeth, and possessing a threat to other vessels in the region.

This has created a values problem in the Indo-Pacific where the values for freedom of navigation in these international waters are no longer shared between the CCP and most Indo-Pacific Nations. Similarly, on the Indian/China border, the two Nations are having disputes and military confrontation near Tibetan borders. India and China too have a shared values problem. In inner Mongolia, the CCP is crushing dissidents and removing all Mongolian language from schools. Effectively creating cultural genocide in a massive scale. That too creates a shared values problem with the Mongolian people.

The lack of shared values all surround the concept of freedom and individual rights. This is a shared value that most democracies can use to align towards a more peaceful world. The CCP does not share this value, they do not believe that your individual rights usurp the political moral authority the party provides.

One example of this influence is America’s ability to quickly mobilize Nations across the Indo-Pacific, to create what is now known as the Quad Alliance. Though this name will probably change to something more conventional in the near future. It could be the start of the Indo-Pacific’s version of NATO. The Quad Alliance consist of The United Stated, Australia, India and Japan. The big caveat in this alliance is India. Since the other 3 Nations already have intelligence sharing cooperation, there is little to nothing new being added between these three, however, having India in the pact will give them the ability to increase assertive tactics in the region when needed.

More on this quad alliance in another article.

According to Miles Yu, Policy Advisor for Mike Pompeo, in an interview with Joshua Philpp of Crossroads, Miles Yu pointed out that China’s shared values problem isolates China and the CCP more than they realize or would like to admit. While at the same time, the rest of the world can see that the alliance is growing stronger. More than this, there is a quite uniting across the world, among our leaders and against the CCP. One could surmise that the world leaders have already started preparing for war with China. Some may want to call this premature or a conspiracy. However, think about the actions that have taken place since the CCP allowed travelers to leave from the Wuhan airport to the rest of the world to spread the virus, while at the same time blocking flights to Beijing, Shanghai and all other parts of China.

Japan is building two more carrier ships to rival China, Australia has created a plethora of legislation in their country that aims to subvert China’s influence with political leaders. Additionally, they have also ramped up their intelligence and military capabilities and continue to do so even today. India has increased its buying power for U.S. military hardware and is paying Russia to expand is fleet of MiG and Sukhoi fighter aircraft. It has also pushed for an expedited delivery time for their Russian S-400 air defense system. Just is just a few of the movements the world can see.

Miles Yu also pointed out that Hong Kong was a testing ground or a “grand experiment that has failed miserably” and that what happened to Hong Kong shows the rest of the world that the communist party cannot be trusted. The suppression of freedom, liberties and basic human rights in such a fascist manner paints a picture of a time we once fought to get rid of.

While the free democracies of the world have individual liberties as a shared value to unite them, the CCP’s version of totalitarian rule is proving to be detrimental to the Country and a high health hazard to the CCP. I myself predict that in the next 10 years, the CCP will be no more.